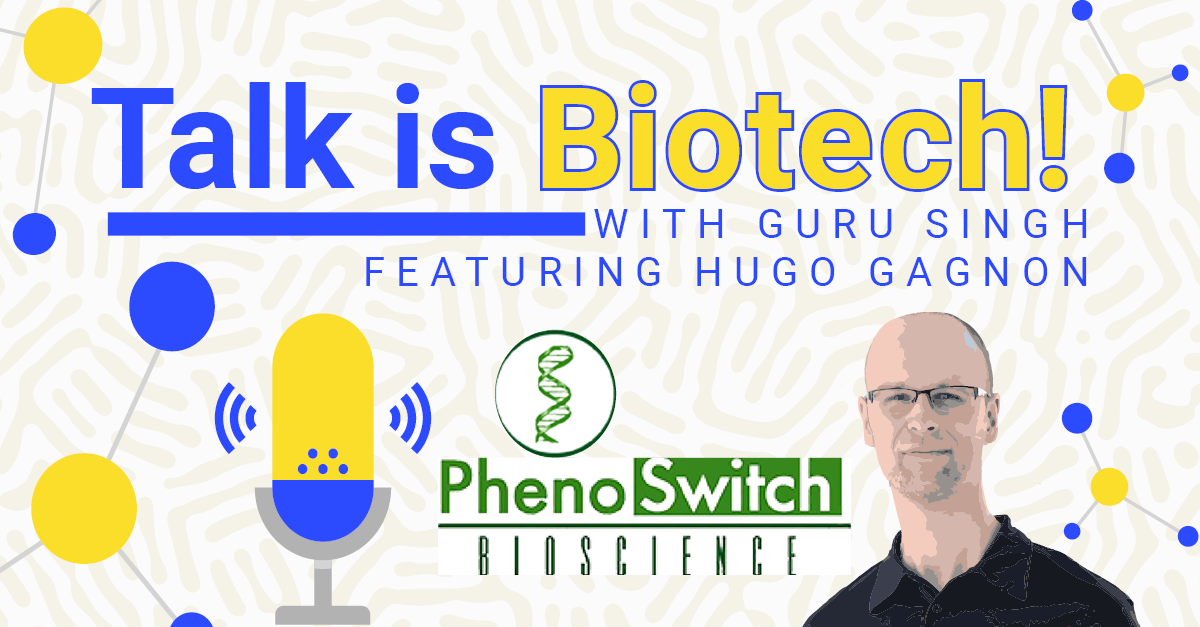 Dissatisfaction became a driving force for this bio entrepreneur to start his own biotech business.

Talk is Biotech! with Guru Singh and Hugo Gagnon

Hailing from a small Canadian town called Rivière-du-Loup (aka Wolf River), Hugo is the CEO of PhenoSwitch Bioscience, a CRO based in Sherbrooke, Quebec. He studied in Sherbrooke before starting his business there, earning a bachelor's degree in biochemistry and a master’s degree in pharmacology.

"I was always fascinated by the innovations mass spectrometry was bringing about and what could it do in the future," Hugo explains.

‍During his Ph.D., Hugo collaborated with a few core labs and CROs to perform mass spectrometry, which led to the realization that most providers were merely interested in running samples without understanding the story he wanted to tell with his experiments. This revelation motivated Hugo to start a "one-stop-shop" for mass spectrometry services.

His company, PhenoSwitch Bioscience, has combined consulting services for all contract mass spectrometry (MS) services to better understand the needs of their biotech or pharma customers, leverage the right MS technique, and generate the data that move their customers' research forward.

Biotech startups gain a competitive edge by working with CROs

Talking to Hugo reinforced my belief that working with specialized and experienced CROs is the best way for biotech companies to accelerate the pace of R&D.

"When you receive so many samples from so many labs, you work on different projects, different models, different types of diseases, and you see the results,” Hugo explains

“You can derisk the customers' research and help them make better and faster decisions."

CROs are an essential business in Québec

Hugo's team supported numerous COVID19 projects. His labs were open throughout the pandemic, thanks to policies in Québec where they recognize CROs as essential businesses and let them operate during the lockdown.

Hugo brings up a good point in that digitization only makes more sense when you have well-implemented processes in the real world. Creating a digital representation of a poor real-world process is hardly of any use.

AI is an overused term in the biotech industry

Most companies claim to offer AI and automation services, but such things aren’t even possible without high-quality, well-structured data. Sharing the story of Quebec's historical healthcare data, which is not even usable, Hugo underscores the importance of capturing and structuring data to support the AI.

The barrier to entry to starting a biotech business

According to Hugo, buying instruments and raising capital were the two biggest barriers to entry while starting the business.

"You see, Steve Jobs and Bill Gates started their companies in the garage. Well, for us scientists starting a biotech business, the academic lab is our garage,"  Hugo stated.

I hope that biotech will become more accessible in the near future, and perhaps an actual garage or a coffee shop will become the starting point of the next biotech success story.

1. Focus on Academia in the early days of business
While sharing the story of PhenoSwitch, Hugo mentioned that his company focused on academia in its early days, and in some ways, they could be just as demanding as their industry counterparts.

"If you can work with academia and satisfy them with your results, then, you will be able to work with biotechs," Hugo stated.

‍
“Don't think that it will go fast, especially in biology. that's one thing. It's just not possible in the biotech business. You need to be patient or otherwise, you will be totally dissatisfied after a couple of years because it's not true that it is possible to do it in two or three years. It’s a long-term game." Hugo explains.