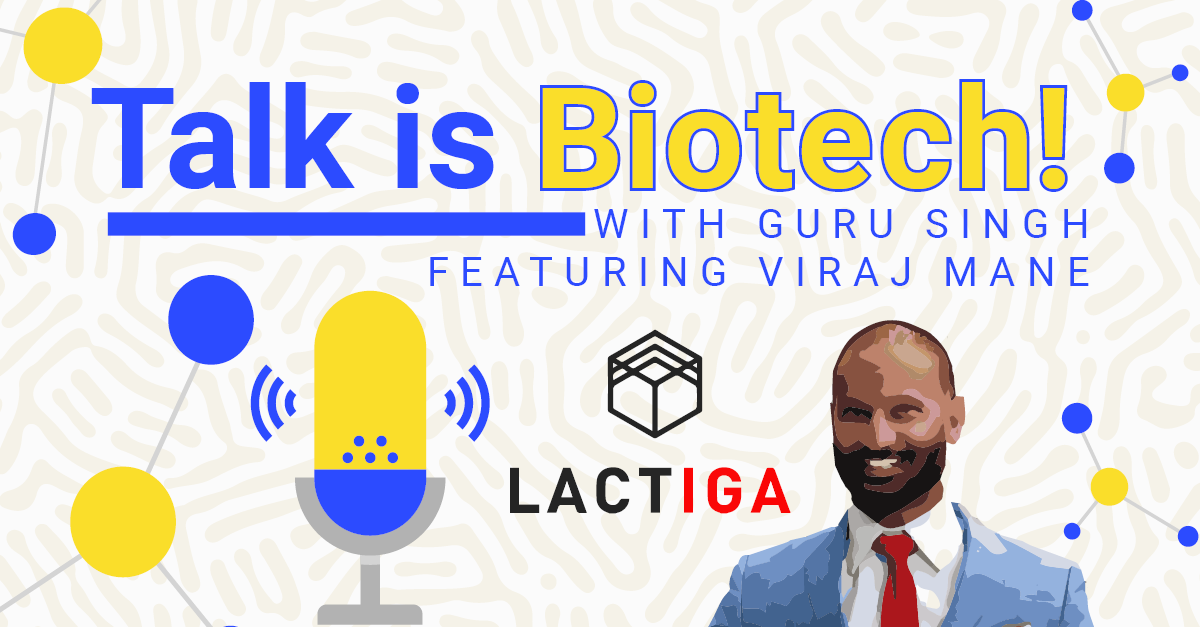 This virtual biotech uses discarded breastmilk to save lives

They say that one person's trash is another person's treasure. Lactiga is a true manifestation of this expression. In the second episode of Talk is Biotech!, I sat down with Lactiga's Co-founder and Chief Scientific Officer (CSO), Viraj Mane. Viraj talks about creating a virtual biotech and his plans to positively impact millions of lives by repurposing the global supply of discarded human milk. He also shares some valuable insights that aspiring bioentrepreneurs may want to hear.

Viraj's career has been very non-linear, but he always had a love of science. He got his Ph.D. in molecular and human genetics at Baylor College of Medicine in Houston, followed by two postdoc positions. "I loved the research environment and the camaraderie and the ability to test the hypothesis." He later developed an interest in the business and tech development world.

"I was fortunate to have opportunities to exit the ivory tower, and I realized that I enjoyed creativity and problem solving and being able to deep dive, but also wanted to take a big picture view on a massive problem statement," says Viraj.

"The business development arena was a great place to flex my skill sets in a way that I couldn't do as often when I'm focused on the nuances of performing a laboratory task, which is very granular and in the weeds," he added.

Viraj, however, found his way back to science. When he started Lactiga out of scientific curiosity, he designed experiments to validate his hypotheses and has been serving as the company's chief scientific officer.

"So here I am now, having come full circle and being focused on the deep nuances of experimental design. So I've returned to being a scientist."‍

"Many of us have heard of blood banks, but there are also milk banks that collect donated milk from breastfeeding mothers who produce more than they need. The milk banks collect those to create a milk product to be given to premature babies or otherwise vulnerable babies who benefit from the immune protection found in pooled breast milk. But at those milk banks, there's always a percentage of their supply, which can be up to 15%, that they do not use because it doesn't pass their sample inclusion criteria. And that is the fraction that we at Lactiga collect and repurpose into a polyclonal antibody biologic," Viraj added.

"We are developing our patented anti-infective biologic to protect vulnerable patients against a broad spectrum of infections. And our current focus is the COVID-19 pandemic." ‍

Motivation to start this biotech startup‍

Viraj came up with his idea to start a company when he became a father and his baby was breastfeeding. He noticed frozen pouches of breast milk stacked up in his freezer and started wondering about what happens to the world's excess milk and whether anyone had leveraged its rich, natural antibodies at a commercial scale. As a scientist, he was aware of the high concentration of antibodies found in human milk.

"As is usually the case, it's a personal story before it's a technology story; I used to look at these pouches of milk in the freezer after I became a father and wonder how much of it goes to waste. As I thought more about that question, I said, well, this is a commercialization opportunity. Still, it has to be driven by science."

Viraj's scientific curiosity took him to the pediatric literature and made him wonder if there was a way to repurpose unused human milk. He realized that no one had ever processed discarded human milk at a commercially viable scale. Discussions with midwives and nurses helped solidify the early concept. Having earned issued patents before, he understood the prior art search and patent filing process. He saw an opportunity to create intellectual property.

"So in 2017, I got started on my idea in earnest. I knew enough people here in the Greater Toronto Area with the protein expertise and the virology expertise to test some of the questions that I wanted to solve. And if we could create datasets, I felt that would put us on the path to a foundational piece of intellectual property. And so that's what we did from 2017 into 2019."

According to Viraj, Lactiga is unique compared to a traditional drug discovery-stage company. "The discovery process at traditional biotech could be a screening of over 10,000 compounds, and then you'd downselect, maybe the top hundred or the top five. And that can take the first couple of years of traditional biotech that's focused on molecular discovery. But that's not happening at all for us; we don't have to worry about down selecting from a larger heterogeneous pool into a more unified product."

"You can think of us as eliminating the first two years of discovery screening that would happen in a traditional chemistry biotechnology company. We've advanced right to the API and doing the proof of concept on the API," said Viraj.‍

So far, Lactiga has run in vitro neutralization studies and tested their drug candidates in two different viruses -- respiratory syncytial virus (RSV) and SARS-associated coronavirus-2 (SARS-CoV-2), in collaboration with The Hospital for Sick Children (SickKids) in Toronto and  Mount Sinai Hospital in New York City, respectively. According to Viraj, they have demonstrated 85% neutralization of RSV.

Viraj added, "Our studies on SARS-CoV-2 models demonstrated that human milk-derived IgA antibodies are in fact able to fully neutralize, which means 100% inhibition of SARS-CoV-2 viral components. That is an extremely promising proof of concept, albeit at the lab scale. Still, it gives us a justifiable roadmap to now extend those neutralization studies into small animals." SARS-CoV-2 is the virus that is causing the current COVID-19 pandemic.  ‍

Is this approach scalable to develop anti-infective biologics solely from discarded human milk?‍

There are over 700 milk banks worldwide, about 4 in Canada and 28 in the US. According to Viraj, Lactiga is in active partnership discussions with numerous banks and has already established partnerships in the US, Canada, and the UK, and plans to keep expanding their network. Viraj said that

"most milk banks discard up to 15% of their milk because it doesn't meet their inclusion criteria,"

"We have confidence that we can expand and extend those partnerships, and we can create manufacturing capacity in any region where we can create these relationships," Viraj explains.‍

The initial focus of Lactiga was to help patients suffering from primary immunodeficiency diseases (PID). These patients are vulnerable to recurring infections throughout the year. Some PID patients currently take a blood product called IVIG (intravenous immunoglobulin), which contains polyclonal antibodies derived from blood. However, this approach is invasive and expensive, and Lactiga aims to use its human milk-derived polyclonal antibodies to treat patients non-invasively.

"We're advancing two asset classes: First, an inhalable product that can coat the airways and lungs to protect against respiratory infections. Second, a tablet or a gel capsule that can be administered orally to protect the gastrointestinal tract."

Based on the literature, Viraj believes the antibodies in human milk are well-suited for the airways and GI tract, which are the major mucosal compartments.

As the COVID pandemic spread, Lactiga devoted its resources exclusively towards COVID19 candidates. "We knew the respiratory vertical of our technology was going to be as important as the oral program. And so the COVID pandemic and the scope of the problem encouraged us to focus deeper on the respiratory vertical, which was already a priority. Because for COVID 19, a respiratory product will target the infected tissues more directly than an oral product."

Viraj and his cofounder are running their biotech entirely virtually. "I have built the fundamentals of this business from a laptop on a table from my home office. And so we have not needed to secure lab space or hire technicians and bench scientists."

Instead of setting up biotech labs, purchasing expensive equipment and instruments, and hiring people to perform experiments in-house, Lactiga partnered with local institutes in the Greater Toronto Area to execute their experimental research.

"When you look at our partners' institutional capabilities, they are above and beyond in terms of the equipment and expertise that I would have wanted in our company. Being able to engage with them as partners and collaborators frees us from the overhead, logistics, and salary requirements of trying to replicate all of that in-house."

True digitization is a prerequisite to support biotech virtualization

COVID made us realize that we cannot always rely on the real world to perform lab research or meet friends and business partners; we must create digital representations of different workflows.

To support the next generation of virtual biotechs, we need to create digital representations of more biotech workflows so that companies can connect, contract, transact, and share data without any friction.

Viraj recommends three things to bioentrepreneurs: 1. Take the initiative to try different things and see what works; expect and embrace the mistakes. In Viraj's words, "fail fast and often," 2. Create your intellectual property (IP) sooner rather than later. "Take a chance on yourself to create some IP even if you didn't fully think through the business plan," and 3. Be patient. "I do not know of any overnight successes, but I do know of successful people who have learned from every experience and failure that they've encountered."